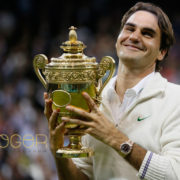 How did Roger Federer win the Australian Open and what does he have to do with wealth creation? He’s 35, had knee surgery 12 months ago, was ranked 17th and had to play 3 top ten players, just to get to the Final.
How about, Roger knows how to take care of business. He doesn’t wait until the second Set to win. He starts from the get-go.

Let’s look at some stats;
• Roger Federer won the first set of Every Match he played in the Australian Open.
• For the first three sets of every match, he won either two or three of the sets.
• Out of Seven games, he only played three five setters.
Basically, he doesn’t wait to win. He gets on with the job from the first serve. Sure he has some resistance from better players, especially in finals. But by winning the first set he sets the tone of the match, he controls the game. By moving early, Roger Federer gets the advantage.
Physically he is at an advantage because he doesn’t have to work as hard as he is playing less sets over the course of two weeks. At 35, each set adds up – especially come the Final.
Psychologically, he forces his opponents into a defensive position, where they have to adjust their strategy to compete with him. He is able to maintain composure throughout the Match, as he is always in front.
So how does this translate to being wealthy? Well, unless you’re a tennis pro this exact strategy probably doesn’t translate directly. But if you’re an average punter, there is an important lesson here.

Get ahead sooner rather than later. Don’t wait for the right time. Just do it. Wealth creation is a long term project.
Let’s look at a financial example. Sarah and Dave contribute $2,400 pa into an investment. The only exception is that Dave is going to start 10 years later. Now obviously, he is going to have a smaller balance at age 65 when they both retire, but how much is the scary part. 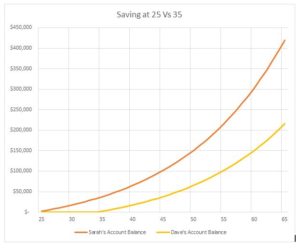 Sarah gets to retirement with a whopping $419,000, whereas as Dave only has $215,000.
That means $204,000 is the cost of delay!
Even crazier, the end balance for Sarah is generating $23,000 pa, compared to Dave who is pulling in just $12,000 pa. Sarah will get paid twice as much for her wealth creation in retirement as Dave will, just because she started ten years earlier.

Two key takeouts from our lessons in tennis.
One -If you want to be the local tennis pro – finish your games early (in time for a quick beer or maybe a round of golf in the afternoon) and give up the five setters (your knees will thank you for it).
Two – if you want to make money through investing, start early. Delaying a wealth creation plan will only cost you.